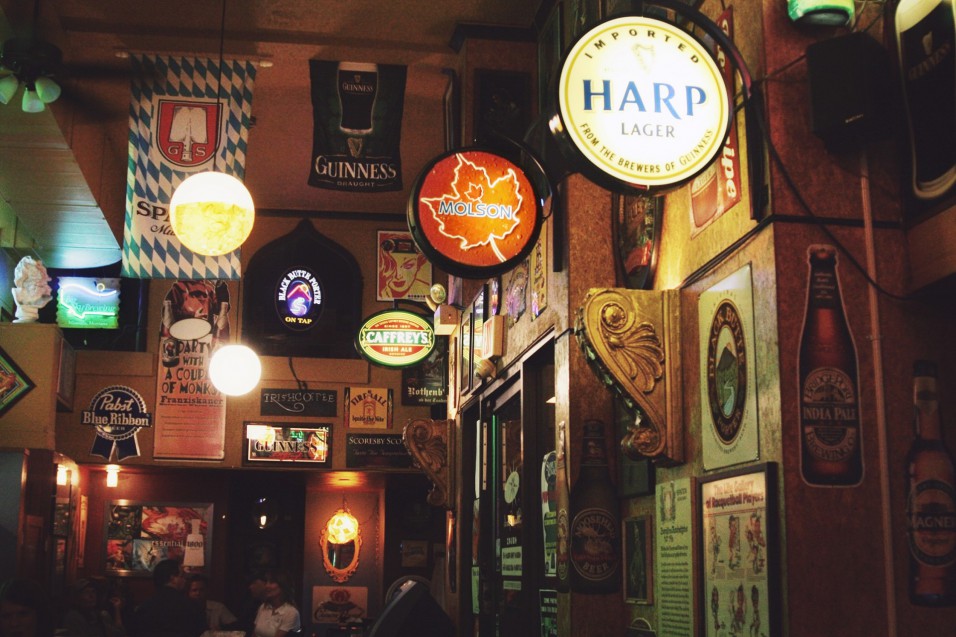 Do I drink to write, or do I write to drink?  It’s a question that has been poisoning my mind to no end, and the only conclusion I have is that I’ve discovered some fucked up mode of operation called ‘Drink-Writing.’

Neither of the two leads directly to the other; they just co-exist in some ridiculous mutation that I try to justify in my attempts to be a writer.  It’s as if I’m not allowed to do one without doing the other.  I’ve tried to extract some words from my fingers whilst completely sober, but my fingers seem to be just as addicted to alcohol as my mind is.  I’m sure that I’m not the first to discover the phenomenon.  I guess, in the beginning, it did come from one action leading directly to the other, but that was when I had no conviction, no plan… no plot… none of the fascinating characters that I mingle with amongst my daydreams, whilst I’m counting down the hours until I clock off at work.

I say hours (not minutes) because the disdain I have for having to hold down a job that is in no way related to my passion needs to be considered in large, full chunks of time that continue to swirl around the ever-flushing toilet bowl of existence.

That sounded bleaker than it was meant to.  Life isn’t that bad.  It’s great, in fact.  I just get frustrated at the pure exhaustion I feel every single day, and the small window of time I have between getting home from work and having to get to sleep at a respectable hour.  That’s my only window to write, and it’s difficult to tell your body and your mind to just sit down and do it… it doesn’t leave a lot of room for spontaneity.  And frustration isn’t the greatest realm to be coming from when you’re trying to write a love story, either.  I did learn a lesson that has helped, though:

Supposedly, Hemingway used to get up at the crack of dawn and smash out five hundred words… and then just go about his daily life.  Five hundred isn’t too hard a task.

Since December I’ve been challenging myself to at least hit the five hundred mark when I sit down and boot up the laptop.  Some days are better than others.  Some days are thousand days… other days are even more.  Thousand days are usually weekends though, and they are showered in a multitude of un-needed cigarette breaks and often enough alcohol to put me to sleep… I tend to find it’s worth the payoff, however.

The main challenge with trying to write on the weekends is that I really just want to go out and be amongst comfort of friends; drinking insane amounts of alcohol and creating the very stories that I find myself wanting to write about.  I live in the heart of the city, and there is an entire jungle out there that I’m completely addicted to exploring.  It’s youthful and adventurous and incredibly creative and inspiring.  It makes me feel like I’m a part of some movement, and that the very stories I’m living (and re-telling) will form some aspect of the future voice of our game-changing generation.

People have started introducing me as a writer.  I don’t know how I feel about that.  Can an athlete call his or her self an Olympian if they’ve never competed at the Olympics?  No, they can’t.  Then again, no-one is going around saying, ‘Hey, this is Scott… He’s trying to be an Olympian. ’  Scott is an athlete.  Olympics or not; that’s all anyone cares about.  I think my greatest battle at the moment is trying to keep on top of the blurred lines of imagination and reality.

They say that all great literature is a love affair between imagination and reality, but when people ask what I’m working on, it’s hard to paint it as entirely fictional when I know that the original concept for the story came from within real experiences.

The further that I delve into the mind of the protagonist, the more similarities I’m finding between he and I.  I know in my mind that I’m building a real person – and he and I are very different beasts – but is there too much of me in there?  Am I committing some form of blinding crime by investing too much of myself into the story?  Will there be major flaws in the work because I can’t seem to separate myself from it, emotionally?  I don’t know the answers to these questions yet.

I think that whilst I’m so young and inexperienced, it’s a good thing.  The words are coming from a place of realism and passion and experience, and I think that experience is by far the stronger guiding light for me.  I don’t like to say I have a terrible imagination, but I can’t see myself ever conjuring up something as profound and wondrous as, say; the world of Harry Potter, or Narnia… or Gatsby, even.  No, I think my fiction will always be a strange reality-entwined creation.

‘Was that part about me?’  Fuck, that’s a doozy, isn’t it?  I’m not going to lie – I’m writing some characters that are a representation of people that I’ve known in my life.  But even then, are they a true representation, or are they just a projection of how you imagine that person living and reacting within an entirely made up world?  That factor alone makes the character very different to the person that you claim them to be based off.

Mostly, once again, the final product is essentially a marriage of imagination and reality… not just reality.  Regardless, I think it’s fraught with danger to bother telling anyone that I’ve based a part of anything I’ve written on them.  If they happen to read my work and are able to draw some comparisons, so be it… but I’m not trying to be a writer to impress anyone; I’m trying to be a writer because I genuinely love to write.

I love to drink and write.  I love to Drink-Write.  I have this ultimate privilege that not everyone in the world might understand – every day I get to slide away into this grand daydream, and converse with these amazing characters that I have created, in this amazing world that I have created.  It’s so peaceful in that world.  It’s so rewarding; getting to lean back after a cigarette and read what I had just written a few minutes previous.  It’s also quite peaceful; going to bed drunk and continuing to dream about the portion I had just been working on.  I think I’m addicted to that.  Actually, I know I’m addicted to that.

I think I’m going to take my laptop to the pub up the road on my next day off and attempt to smash out my five hundred words in a different environment.  I haven’t done that before… I’ve mostly just written from home.  I always had this image in my head of what it would be like living in the city – hiding away in the corner of some dive bar, keeping warm and being entirely dedicated to my book – but I’ve been here eighteen months and never tried it.  Maybe it’s time I did?  Maybe that’s a portion of the creative spark that I’ve been lacking, amongst my exhaustion.

I’ve been frequenting dive bars, yes, but it’s never been alone and it’s never been to write.  It’s been to drown myself in a sea of diverse human beings and human behaviour – to study the nature of life, love, friendships, attraction and various forms of complete ridiculousness.  I love ridiculousness; it make’s me feel like I’m completely normal.  I know I’m not normal, but just for a fleeting moment, I like to feel like I am.